A brief history of Sidmouth Esplanade 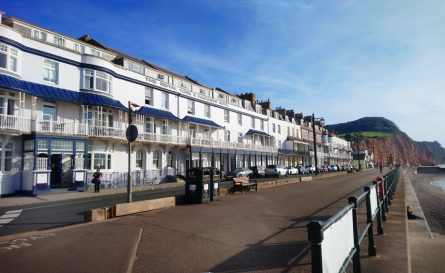 Stepping onto Sidmouth Esplanade, you cannot help but look left and right at the majestic red cliffs of Salcombe and Peak hills, standing guard over Lyme Bay. Joining east to west is The Esplanade. A walkway popular with generations of visitors and locals taking in the sea air and far-reaching views to the horizon.

Until the eighteenth century, Sidmouth had remained a village by the sea where farming and fishing were the main occupations. Its presence as a holiday destination was a distant dream, the idea of the seaside as a place to holiday was, as yet, unheard of.

It was in the mid 1700s that the gentry of London and home counties began to visit the south west in search of the medicinal properties of its sea water. By the late eighteenth century, this fashion had reached Sidmouth, and many wealthy visitors started to arrive in the town. Notable visitors were Jane Austen, the Duke and Duchess of Kent and a Grand Duchess of Russia. As a means of very early social media, the widespread development of watercolour painting helped to promote Devon’s coastline as a beautiful and tranquil place to be. The image of Sidmouth, in particular, was very popular as the shape of its bay resembled those in Europe. Without these pictures, potential visitors would not have seen what was so much closer to home. The Instagram of its day.

The York Hotel was built in 1807 at the eastern end of the Esplanade on waste land that had previously been used for ship building. It was Sidmouth’s first purpose-built hotel. The town’s reputation continued to grow with the arrival of John Wallis in 1809. He opened a very popular marine library on the Esplanade (Sidmouth Museum has a collection of 250 pictures from the library). This marked the arrival of Sidmouth as a Regency resort.

If you take a walk along the Esplanade today, you will see gothic style Regency architecture in nearly every building. Originally lodging homes, as opposed to hotels, the Esplanade transformed during this period. The Royal York & Faulkner Hotel has many features of this style, with its verandas, balconies and canopies. Not surprisingly, the population of Sidmouth grew quickly from 1,252 in 1801 to 3,455 in 1851.

By Victorian times, Sidmouth was established as a seaside retreat for wealthy visitors. The unspoilt charm of the town continues to this day with its unique position and abundance of Regency architecture.