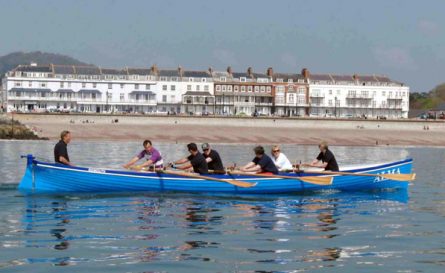 One of the joys of staying at the Royal York and Faulkner Hotel is its close proximity to the sea and all the activities that take place on the sea. What could be more relaxing on a balmy Summer evening, than to step out of the hotel onto the Esplanade. Then stroll along to watch the Sidmouth Pilot Gig rowers training in the calm waters of Lyme Bay.

The 2019 gig rowing season started back in May and carries on until October. Training does continue throughout the Winter months. During the Summer, you can watch the gig rowing on Wednesday and Friday evenings and Sunday mornings.

Sidmouth Gig Rowing Club was founded in 2009, when its first boat, Alma, was bought. Since then the club has raised enough funds over the years to buy a further two gigs. Keith Owen, a clinker-built wooden racing gig and, most recently, in 2018, a second racing gig, Little Picket. The latter’s claim to fame is being the 200th pilot gig registered with the Cornish Pilot Gig Association.

The club currently has over 100 members; ladies and men’s teams, together with a growing youth section that starts at 13 years and over.

The Pilot Gig rowers put all their training to good use when they take part in regattas throughout the Summer in Dorset, Devon and Cornwall. This year, the Sidmouth Rowing Regatta takes place on Saturday 13th July, hopefully with lots of sunshine and calm seas.

Back in May, the club took the gigs to the World Gig Championships in the Isles of Scilly for the sixth time. Considering nearly 200 gigs competed in the Championships, and the unpredictable choppy Atlantic seas of the Scillies, the Sidmouth crew did remarkably well, winning two races.

Check their website for training details and the latest weather forecast!