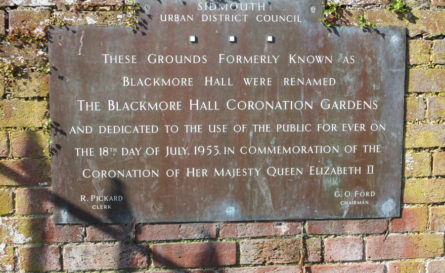 As any visitor to Sidmouth knows, there is an abundance of interesting places to explore around the town. Be it; walks along the beach, a stroll through two miles of The Byes parkland or a wander through the town spotting blue plaques. But, if you dig a little deeper, there is even more to be discovered in the ‘lost’ buildings of Sidmouth. 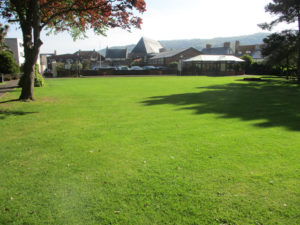 Of the many places in Sidmouth to sit, relax and simply enjoy the peace, Blackmore Gardens has to be one of the best. What many don’t realise is, that where the benches near the entrance to the gardens stand, was once the terrace of a grand house, Blackmore Hall.

Built in 1813 for the Reverend Philip Story, the two storey house was built in the Regency style. It included an ornate staircase, a large drawing room and a service wing for servants. French windows opened onto the tiled terrace. Beyond, high walls enclosed a landscaped garden, much of which survives today.  For the next 150 years, the house was occupied by many interesting characters. These included Sir John Kennaway (owner of nearby Kennaway House),William Strahan, a London banker who had been found guilty of fraud and sentenced to transportation, and the son of the Earl of Radnor. Eventually, the house came to Sidmouth Urban District Council. The derelict building was subsequently demolished in 1955. Visit Sidmouth Museum for more information. 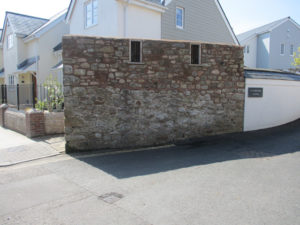 Just before the ford on Mill Street, where new houses now stand, is the site of the long gone Sidmouth Jail.  Built around 1862, the jail had two small cells with barred windows and a slate roof. Next to it were two police cottages. The jail remained here until the 1890s. 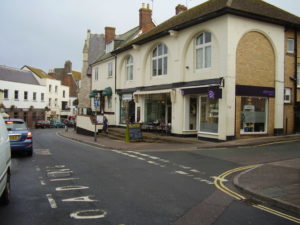 This isn’t exactly a ‘lost’ building as much of the original brickwork still remains, however, few passers-by would know of its hidden history. Built at the top of the High Street, the Grand Cinema opened in 1929. The building had a typical cinema design of three brick curves at the front and a brick curved facade at the side.  Above the second floor, a large sign ‘GRAND’ was mounted in a roof level brick wall. A large glass canopy hung over the entrance and steps. Sadly, large parts of the building were destroyed by fire in 1956. The building was rebuilt using the original front walls and is now occupied by two shops and a tearoom.