Sidmouth: Valley of a million bulbs 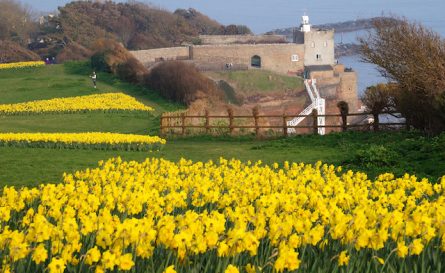 It’s that time of year again when Sidmouth bursts into colour thanks to a generous gift bequeathed by a former RAF pilot.

The Sidmouth ‘Valley of a million bulbs’ project was the brainchild of multi-millionaire Keith Owen. He bequeathed £2.3 million to the town and instructed the Sid Vale Association, to Think big! Plant a million bulbs! Get everyone involved.”

Over a period of three years, commencing in 2013, more than 50 groups were involved in planting 623,000 bulbs across Sidmouth. Each spring the whole town benefits from the amazing community effort as the daffodils, snowdrops and crocuses all burst into flower and brighten up the valley.

Work on the project has now ceased to allow funds to be allocated to more urgent projects. However, as the bulbs naturalise and reproduce it is anticipated that Sidmouth will soon have its one million bulbs.

Our favourite planting spot is the spectacular display on Peak Hill where a swathe of stunning daffodils flood down the hillside.

Keith Owen was born in Totnes and became an RAF pilot. He left England in 1976 to start a new life and career in Canada but regularly visited Sidmouth where his mother had retired. He loved the town so much that he planned to retire here too. Sadly, in 2007 whilst on a visit to Sidmouth he was diagnosed with a terminal illness and given only weeks to live.

He bequeathed £2.3 million to Sidmouth with instructions to leave the capital untouched and spend the interest on projects to brighten up Sidmouth as well as neighbouring Sidford and Sidbury.